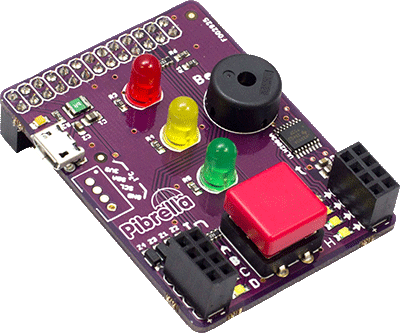 The Pibrella from Cyntech is a great add-on board for the Raspberry Pi which consists of 3 large LEDs (Red/Amber/Green), 4 digital inputs (A-D), 4 buffered outputs (E-F) with white LEDs to indicate their state, large switch and a Piezo speaker.

To use it, launch ScratchGPIO Plus and create a variable called AddOn and set its value to Pibrella in your On Green Flag event.

BeepXX,YY is also available where YY is note duration

The 4 inputs are recognised as sensor values InputA to D.  These give “off” normally and “on” when activated.  The switch is called “switch” and gives off and on.

To control the brightness of the LEDs use PowerRed/PowerAmber/PowerGreen

To control the power settings of the outputs, use PowerOutE to H.You can connect up a low-cost 5pin stepper and connect it to the outputs (Red to any left hand one, the other 4 to the 4 right hand ones) and use a variable called Stepper to make it turn.