I’d heard about hacking Amazon Dash buttons to control stuff via a Pi but never bothered with them.

Setting up the Dash

I won’t repeat details here on how you register them and then disable them again – just google and follow the 10’s of articles on it.

You end up a WiFi device that is setup with your WiFi credentials but is unable to place any orders.  When you press the button, it quickly powers up- trys to connect – fails – flashes the LED – and shutsdown again.

So, the aim at this point is to notice when the device is trying to connect.

then create a prog called trigger.py

But we need to change the MAC address before we run it.

So, once you’ve found your MAC address – change it in trigger.py and

Press the button and you should see a message appearing

Sending an MQTT message to my broker

So intead of printing a message on the screen, I added a bit of code and created dash_mqtt.py

which simply just publishes a message on topic dash, to my LAN mosquitto broker (but you could use a public broker if you don’t have your own one)

Node-RED flow to take action on the MQTT message

Final link in the chain is to use Node-RED to listen out for the MQTT message and then do something when it arrives.

I decided that I wanted the Dash to change the global Cheerlights colour.

This is because when people notice the neopixel ring in my water feature, I tell them they can change it by tweeting a colour and including #Cheerlights in the tweet – a lot of them don’t use twitter!

So I’m going to leave the button outside (on a table in my covered BBQ sitting area) so that they can press it and get the Cheerlights to change to a random colour.

The flow looks likes this 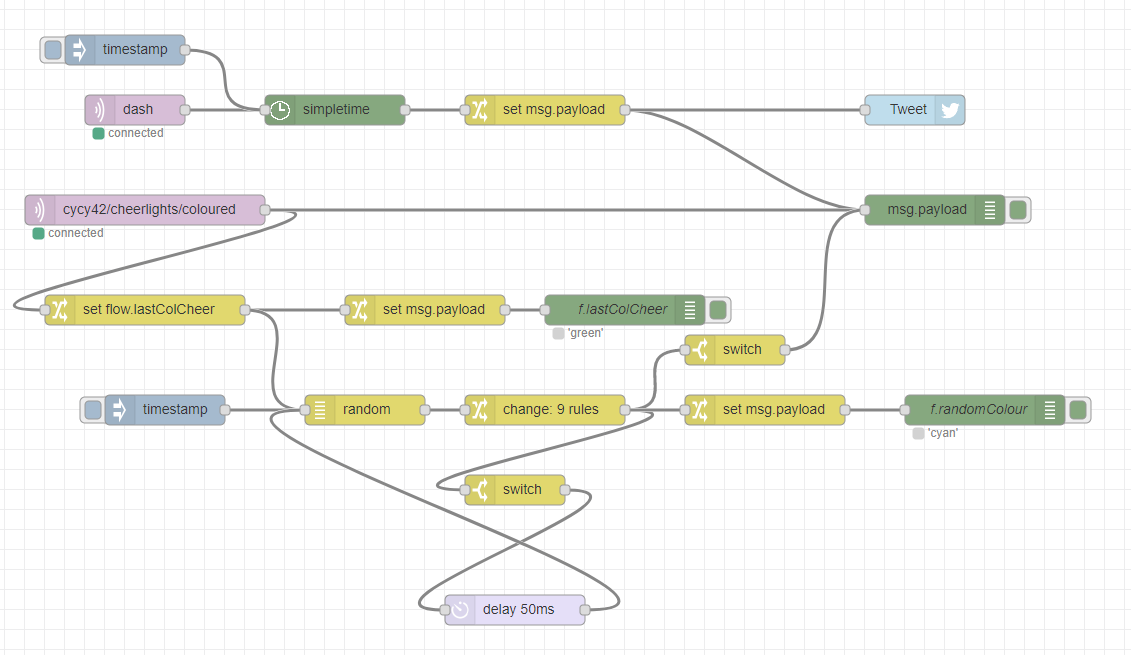 The top half listens for the MQTT message, adds in the current time and mixes in a random colour generated by the bottom half of the flow and sends a tweet out. 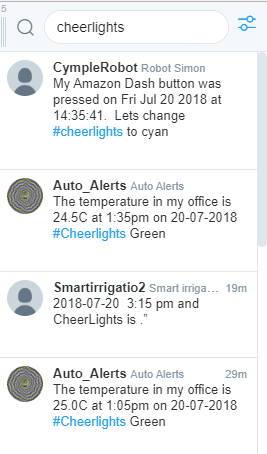 The bottom half of the flow determines what the colour will be – it basically generates a random number 1 – 8, looks up a colour based on that number, checks to make sure its not the current col – if it is – i tries again.